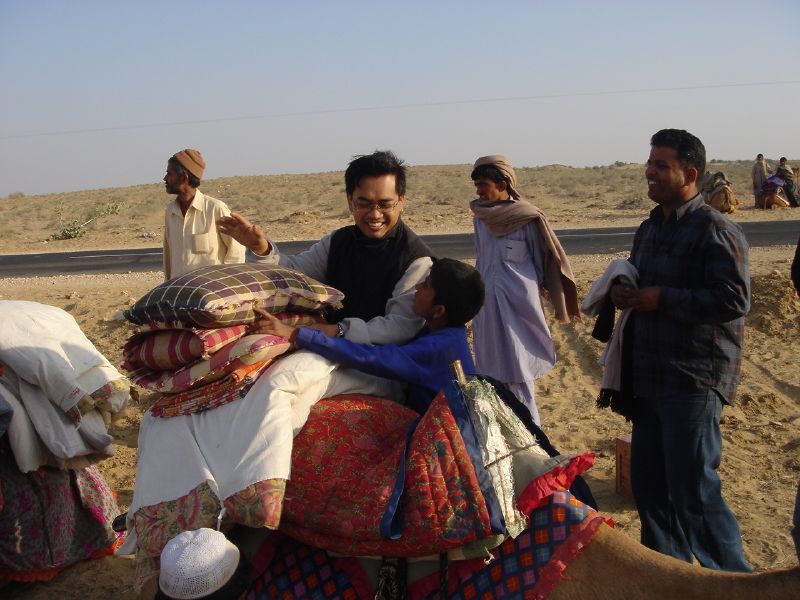 I woke up from a slumber, I could feel the grinding feeling of the sands between my teeth, I open my eyes and saw sands around me. Three camels were there already grazing among the most minimal vegetation found on the vast desert. I scanned around myself and found that both of my friends were there too wasted, tired, lying there along with me on top of the sand dune. We discovered that we were all clad in pagri (head gear like the Punjabi Turban), complete with the traditional Rajasthani earings on each of our left ears. I realize we were in rush when we set out for the journey that we had to had our denims and shirts on instead of the Rajasthani wardrobe which we had really wished to dorn with. I re-shake and tried to remember the whole thing, read ahead for the whole story how I landed up riding a camel, camped on the sands, had food in the starlit night, woke up waiting for the sun to emerge from the sands.

I landed at the Jaipur Airport, Rajasthan and was picked up by my friend, Satyendra. Reached the RIICO Guest House, the air was already filled with the sounds, bells and whistles of the Marriage which was two days ahead. My other friend Kennajit was already there besides other friends. We three, the three of the five notorous gang during the Manipur Public School days re-unit after almost 10 years. Though the actual Marriage Ceremony of Amrita (Dimpi) Kshetrimayum and Saurab Gupta was on the 28th November, the usual Indian wedding goes on for days before and after the actual marriage and this was no exception. After getting to know the crowd, relatives, friends and everybody else better, we were ready to rest in bed, prepared for the Engagement Ceremony the other day.

Early in the morning when I woke up, an urgent urge was wriggling inside me and I realized I wanted to connect to the net, check mails and be online. Well, the PCMA GPRS was delayed despite my wish to get it before leaving for the City, neither my GPRS worked here. So, I have to find a Cyber Cafe and it took me about an hour to find one. They had “5 fast computers“, well they were right, the computers were fast but the internet connection was terribly slow. Went into their network and tried to check my mails but I gave up after almost an hour, looking at my Notebook’s screen make me realize that my Inbox is already pregnant with mails.

Got back to the Guest House, the marriage attendants, relatives and everybody else were busy, clad in colorful Indian dresses all over. Changed, mixed up with the people and then I realize that from our side (Bride), there are only a few people and everybody else was from the Groom side. And I with my friend ended up trying to arrange, manage many things, getting the guest to their right rooms, getting breakfast, lunch for the guest, seeing that things are delivered, finished, packed et al.

The afternoon sun dawn on us and the actual Ring Exchange ceremony was on, joined the team trying to get most moments of the event on my small digital camera (a Sony DSC-T1). The ceremony went on till late in the wee hour of the evening, templated with songs, dance, music, foods. The ceremony finally ended with a slide show of the Groom’s Family Pedigree (I like that concept). But the night was young and the starry sky was tempting us to stay on. Though most of the oldies have retired to bed, there were still many young people playing around the big lawn amid the Guest House. Joined them and talked about many things, with flash-back memories of young days flashing around. The night was cold but who cares, the warmth, the smiles, the giggles, the laughter of the tiny tots, youngs boys, young girls were all around us. Finally, retire to bed, tired but with a never give-up attitude.

This was the big day for Satyendra’s sister, Amrita Kshetrimayum. She is getting married to Saurab Gupta of Jaipur (Rajasthan, INDIA). Jaipur is also popularly known as the Pink City. The day was another long day but a day filled with songs, music, dance. The groom side though is said to be on a more happier realm than the bride’s side. That day seemed to moved on fast, people around, with full attention on the Bride and the Groom. The tiring part was the actual mantra for the wedding, I went up to the guruji and had to even asked him how long will the whole event last.

With the bride finally at her home now, we set out to to explore Rajasthan, starting from Jaipur itself. Jaipur is indeed a nice town, not so fast but steady. There were lotta forts to be seen. One special place I like most was the Elephant ride on that day. It was my first Elephant ride and we all enjoyed it very much.

We decided to head towards Jodhpur and visit most of the tourist spots, more forts, palaces et al.

Jaisalmer was the better of the whole lot, it was the place of our much anticipated camel ride into the Desert, camp in the desert and return back riding the camel. We went out in the afternoon after visiting many places of Jaisalmer, towards the desert. Riding on the camel, we were already exhausted but in high spirit when we lay down on the sand dunes. Had our fire in front of the make-shift camp, had dinner in the dark and slept on the sands. Waited for the sun to rise, had breakfast and headed back to normal civilization around afternoon.

Flew back home to Mumabi on the 4th of December. And it is of no point mentioning the fact that there are more than 900+ blog spams tangled in my inbox along with other spams, mails and many messages waiting for me to look into.

Brajeshwar
I am a designer. I design experiences, opportunities, careers, teams, products, solutions, and organizations.