I was willing to brush it aside as another harmless mistake by some high profile sites, “we all make mistakes”. However, Mrinal’s second tweet (Mrinal’s articles are here and here) got me thinking and wanted to bring forth some clarifications for the Rich Internet Applications (RIA) realm.

Recently, Mary Jo Foley at ZDNet wrote an article – Microsoft Live Mesh to get more competition from Sun. While talking about JavaOne where Sun unveils their future cloud-computing platform – Hydrazine – which will be in direct competition with similar offerings from Microsoft, Google, Amazon and others, she wrote –

“Robert Brewin, Sun Chief Technology Officer and Distinguished Engineer, described Hydrazine as a combination of Amazon’s Elastic Cloud, Microsoft’s Live Mesh and Google Analytics all rolled into one. It’s a platform that Sun is building on top of JavaFX.” 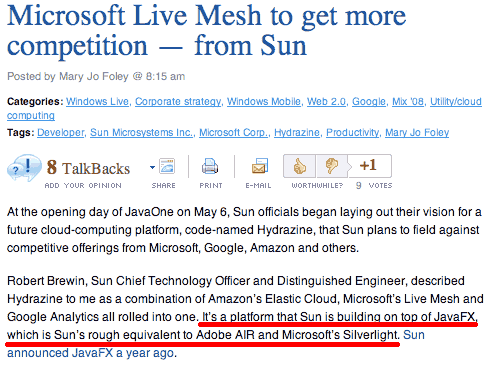 From the article, it is definitely clear that Hydrazine is a server side solution and JavaFX is a client side solution. So, how can Hydrazine be built “on top” of JavaFX?

“JavaFX, which is Sun’s rough equivalent to Adobe AIR and Microsoft’s Silverlight.”

Further down in the article, she has written

“Sun also is working on JavaFX Script, a new scripting language that will do for Java developers what FlexBuilder and Expression Blend are for Adobe and Microsoft developers, respectively.” 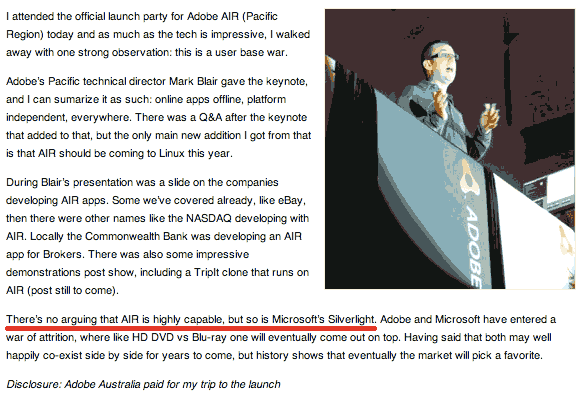 “There’s no arguing that AIR is highly capable, but so is Microsoft’s Silverlight.”

Bernard Lunn of ReadWriteWeb wrote about MetaASO: A Bootstrapped P2P Startup From India.

“MetaASO stumbled at the first hurdle for me, which was that you need Silverlight and that means a PC (I use a Mac).”

How cool! Guys, they’re on Macs and no PCs. But, Silverlight can run on a Mac. Silverlight is a browser plugin just like Flash Player and runs on both PC and Mac.

Silverlight is a cross operating system, cross browser plugin which is very similar to Adobe’s Flash Player. It has a subset of abilities of the .NET Runtime. The term Silverlight also includes the web application library built on top of the runtime and this library is very similar to Adobe’s Flex Framework. Microsoft’s .NET runtime is a Windows only desktop runtime. Some version of it is included in most recent version of Windows. It allows you to run Windows desktop applications.

Well, these are the facts churned out by the top profile sites, rendering the prospects of the future Rich Internet Applications, eerr, rather bleak! Or do we really care?