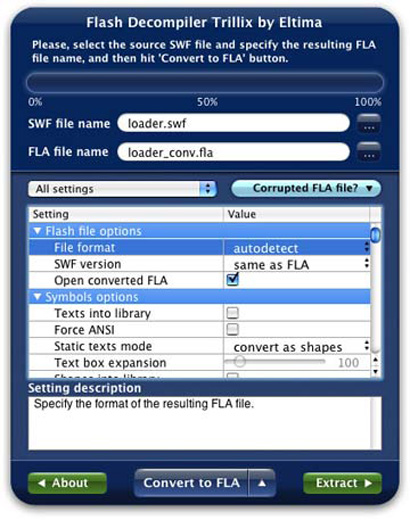 Flash Decompiler Trillix is perhaps the only tool available for the Mac which can help you regain lost FLA source files. It supports up to Flash 9 and ActionScripts 3.0. The people from Eltima were nice enough to send me a review copy of their software.

To modify a Flash file, you can simply convert the SWF into an FLA, modify/replace any of the Object and publish it back to SWF. Well, the interface is rather Window like but ported to the Mac, but I guess that’s OK. 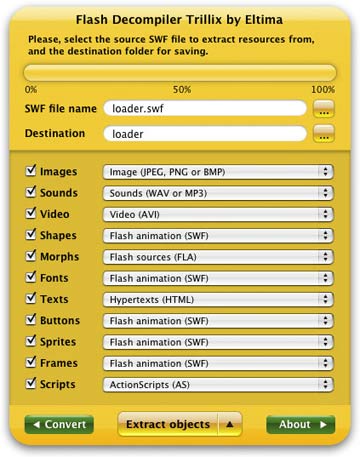 Well, if you’re on Windows, have a look at ActionScript Viewer which is an awesome piece of Flash Decompiler for Windows.

However good our Internet Connection speeds are, smaller size files are always better on the Internet. And the first reaction from common people when they hear about Flash is that – it is one big chunk of file! 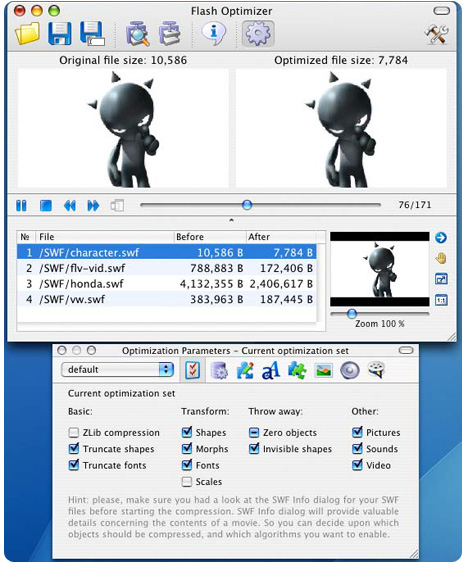 Flash Optimizer for Mac allows you to pick between size and quality of your SWF. It provides a full range of compression functions, such as vectors, shapes, morphing, Z-buffer, fonts and other optimizations of various Flash elements. This can substantially reduce the size of your Flash-based content.

The interface allow you to preview the result side-by-side in 1 or 2 built-in players with zooming in/out options. Flash Optimizer for Mac features the “SWF info” button, which indicates the details of the Flash movie, like percentage of all movie components (pictures, shapes, videos, actions) and both the sizes of original and reduced files. Flash Optimizer fully supports Flash 9.